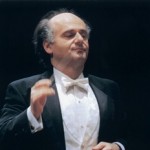 Critics on both sides of the Atlantic have been unanimous in their praise. Pravda hailed Maestro Arman as a “fascinating and striking musical personality,” while the Broadcast Review in Prague reported “a spirited and nobly rounded performance.”

Born to Armenian parents in Istanbul, he played his first violin recital at the age of 13. After arriving in the United States on a Disney Foundation scholarship, he concertized from coast to coast, appearing in major US cities as well as at prestigious music festivals in Tanglewood, Spoleto, New York and Florida. After several seasons of leading US orchestras as concertmaster, he began a conducting career that has taken him all over the world.

In 1982 Nurhan Arman moved to Canada to accept the post of Music Director of the North Bay Symphony and the Northern Music Festival. In 1987 he was named Music Director of Symphony New Brunswick which he swiftly built into a major regional resource. In March of 1993 Maestro Arman was appointed Principal Guest Conductor of the Yerevan Symphony in Armenia. In 1998 Maestro Arman founded Sinfonia Toronto, now considered one of Canada=s finest chamber orchestras.