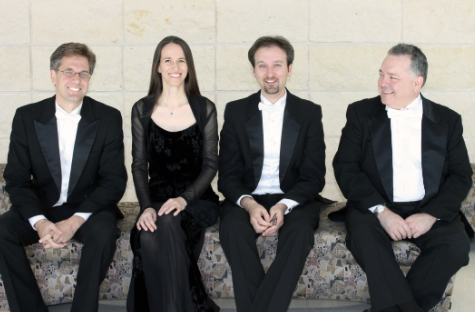 A gem in the cultural landscape of the Texas Panhandle, the Harrington String Quartet was established by a generous gift from the late Sybil B. Harrington to benefit West Texas A&M University, the Amarillo Symphony and the Panhandle community. From its founding in 1981, the quartet has distinguished itself in performances across the state and nation, as well as internationally. Highlights of recent seasons include: New York debut in Carnegie’s Weill Hall; PBS documentary A Sound Collaboration – The Harrington String Quartet; participation in the Amadeus Quartet Seminar in London, England. The quartet has also enjoyed collaborations with world-renowned artists David Shifrin, Pepe Romero, James Dick, William Preucil, James Dunham, Rober Levin, Arthur Rowe, and members of the Cavani, Miró, and Pro Arte String Quartets.

Harrington String Quartet’s collaborative CD with the Phoenix Chorale Northern Lights was named Best Classical Vocal Album of the Year on iTunes’ Best of 2012. The quartet can also be heard on an Albany Records Super Audio CD of the music of Daniel McCarthy, and is anticipating a CD release with chamber works of Mendelssohn on Centaur label.
The members of the Harrington String Quartet are in residence as faculty members at West Texas A&M University and serve as principal players of the Amarillo Symphony.

Violinist Rossitza Jekova-Goza pursues an active career as a performer and pedagogue. She has made numerous appearances as concerto soloist and recitalist in the United States, Germany, Switzerland, Italy and her native Bulgaria, and has served as concertmaster of the Baton Rouge Symphony Orchestra and the Verbier Festival Orchestra in Switzerland, as well as principal second violinist of the Royal Philharmonic Orchestra in London.

Teaching appointments include the Universities of Arkansas, Oklahoma and North Texas. She has presented master classes and workshops at the state universities of Florida, Louisiana, Kansas, San Francisco and Wichita, Indiana University, University of Iowa, as well as at specialist music schools in Idyllwild, Dallas, Sofia and Burgas (Bulgaria). Among the summer festivals at which she has taught and performed are the prestigious Encore School for Strings, Schlern International Music Festival in Italy, Oklahoma Arts Institute and the Heber Springs Chamber Music Festival.
Prior to joining the Harrington String Quartet in 2010, Rossitza Goza was a member of the Fulbright Piano Trio and the Holmberg String Quartet. As a member of the Bulgarian String Quartet, she was a co-winner of the 1999 MTNA national competition in chamber music.

Keith Redpath joined the Harrington String Quartet and Amarillo Symphony as principal second violinist in January 2003. Previously, Mr. Redpath performed as principal second violinist of the Wichita Symphony and in the Minnesota Orchestra, Minnesota Opera Orchestra, Pacific Symphony, and the Spoleto Festival Orchestra. As a member of the Wichita based Sedgwick String Quartet he has performed in chamber music concerts at the Spoleto Festival in Charleston, SC and at Festival Dei Due Mondi in Spoleto, Italy.
Mr. Redpath has been an educator on the faculties of Interlochen Arts Camp, Sewanee Summer Music Festival, Bethel College (Kansas), and Eastern Music Festival. He currently teaches violin and chamber music on the violin faculty at West Texas A&M University.

Vesselin Todorov, Bulgarian-born violist, is a winner and prizewinner of national competitions in both violin and viola in his native country. He has served as principal violist of the Baton Rouge and Greater Bridgeport Symphonies, and held the Christopher and Evelyn Getman Chair at the New Haven Symphony. A versatile performer, he has also been an associate concertmaster of the Baton Rouge Symphony and a violin section member of a number of professional orchestras across the US.
Mr. Todorov holds a Master of Music degree and an Artist Diploma from the Yale School of Music. In 2008 and 2010 he led the viola section of the Yale Philharmonia in concerts at Carnegie Hall, and performed in Weill Recital Hall with Peter Frankl. Among his most influential mentors are violinists Kevork Mardirossian, Ifrah Neaman and Camilla Wicks, violists Jesse Levine and Ettore Causa, and the members of the Tokyo String Quartet.

Emmanuel Lopez has spent the last twenty years as a member of the highly acclaimed Harrington String Quartet, principal cellist of the Amarillo Symphony and as Harrington Lecturer at West Texas A&M University. He holds degrees from Yale University, University of Connecticut and Juilliard School.

He has won numerous cello competitions, including the Janos Starker-Aldo Parisot International Cello Competition, the Debut Competition of Los Angeles, the Wurlitzer Collegiate Artist Competition, the Louis McMahon International String Competition, and others. As a recording artist, Lopez was nominated for a Grammy Award on Delos’ Bach/Bachianas with soprano Arlene Auger and the Yale Cellos and more recently as a member of the Harrington Quartet for their recording of the string quartets by Daniel McCarthy on Albany Records. For Delos, he recorded Tchaikowsky’s Rococo Variations for cello and orchestra with the Paraiba Symphony under the direction of Eleazar de Carvalho and also received critical acclaim for his recording of Samuel Jones’ Cello Sonata with pianist Denise Parr-Scanlin on the Naxos label. He lives in Amarillo with his wife Eleonora and his children Susie and Daniel.